Sadly, for a second year running, it didn’t seem appropriate in these difficult times to hold the famous Coln St Aldwyns Children’s Fete, but instead we’ve come up with a two-in-one village event that we hope will both raise tons of money for local children’s charities and herald in some happier times. On Bank Holiday Saturday (28 August) the Fete team will be hosting The Breakout Party for the five villages in the gardens of Coln Community Stores. It’ll start at 6.30pm and promises to be a super family event with food, a bar, and dancing to the music of all-time Fete favourites, the Ukey D’Ukes. It’s a free-entry event but we’ll expect you to buy some raffle tickets and together with the profits from the food and drink stalls it should mean we’ll once again raise a lot of money for local children’s good causes. Your generosity at the 2019 Fete, which was sponsored by Cotswold Airport, meant we were able to provide £9,225 in funding for 11 local projects.

And that’s not all – at some point during the party we’ll cheer home Coln resident Dave Farnhill, who’ll be running three marathons, one after the other, in 24 hours or less! That’s nearly 80 miles and we’re calling it The 3M Challenge. He’ll be setting off from Coln Stores on Friday evening and plans to complete the Challenge by running just over 17 laps non-stop around Coln and Hatherop.

Each lap is just under five miles long. He’ll be running on behalf of four of our favourite local children’s charities Noah’s Ark, James Hopkins Trust, Paternoster School and Scrubditch Farm. The link to his JustGiving page is https://www.justgiving.com/fundraising/coln3m.

We’ll be updating you over the summer about both events, but in the meantime just save the date for what promises to be an amazing Bank Holiday. And isn’t it just what we need?

A great family day out 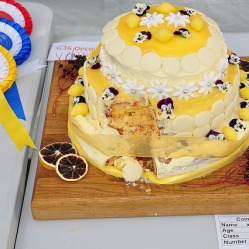 The date for the 2019 Coln St Aldwyns Children’s Fete & Produce Show is Saturday the 31st August.

You helped us make a great day out for the children of the five villages and your support will fund local children’s charities and activities in the year ahead.

Cotswold Airport, our overall sponsor, plus:

The 2018 Fete featured live music from Josie & The Outlaw, the children’s entertainer Jester Giggles, a bouncy castle and children’s games, and the introduction of a dog show.  The tombola had its best year to date, and the book and designer clothes stall were a great success.  There was plenty of food and drink, and the raffle, silent auction and golden lucky dip helped to raise even more funds for local children’s charities.

Free entry and fun for children

Plus, there are special children’s categories and prizes in the associated Produce Show.

In 2018 there was the Grand Raffle with fabulous prizes to be won.

Thank you for your support!

The popular Produce Show with lots of categories to enter, both for children and grown-ups, runs alongsiad the Children’s Fete